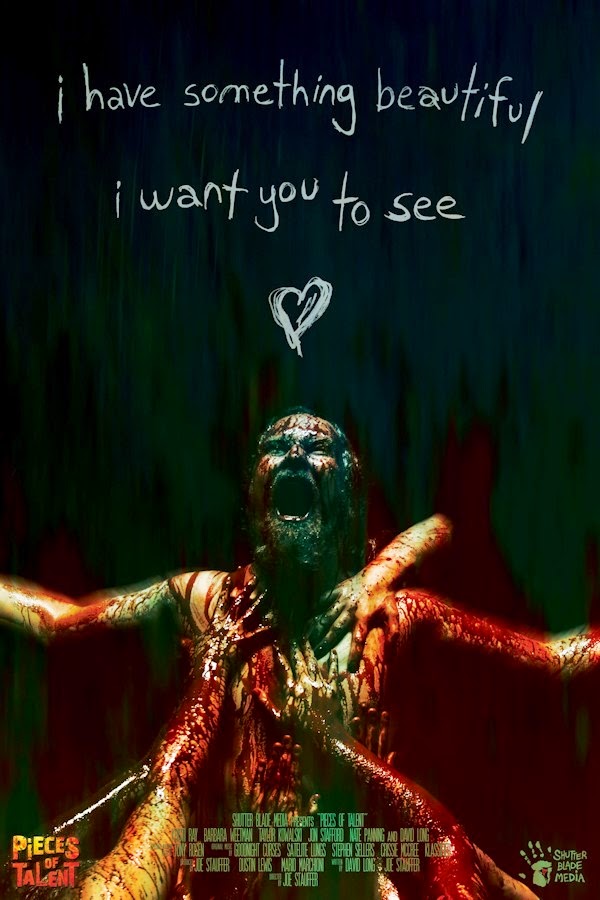 Pieces of Talent, one of the year's most critically-acclaimed independent horror films, is now available for free viewing online. Shutter Blade Media has uploaded the entire film and encourages viewers to share it (see link below).

Fangoria calls Pieces of Talent "clever, exceedingly well-produced, sharply written." Moviepilot says it's "an exceptionally well-made horror film." Horror Society raves, "I can not recommend this movie enough." Now you can see was has these writers gushing, free of charge. If you enjoy it, Pieces of Talent is available for purchase on DVD and VHS from the film's official website.
Pieces of Talent is available for free in an effort to raise awareness about the upcoming sequel, "A Missing Piece". Director Joe Stauffer is back with another horrifying vision, and he's turning to fans to help bring it to life. He has launched a pre-order campaign in order to raise funds to produce it.
By purchasing a special edition Blu-ray/DVD combo pack, a digital screener, an autographed poster or an executive producer credit, backers will be the first to see A Missing Piece prior to its official release. The Blu-ray/DVD set will feature both A Missing Piece and Pieces of Talent, along with a host of supplemental material, including a "Choose Your Own Adventure" option that allows the audience to experience A Missing Piece in different ways.
A Missing Piece will further explore the world in which serial killer David Long creates his art. Stauffer explains, "We are extremely excited to further explore the lives of David and Charlotte in order to show a little more about what makes David tick." David Long and Kristi Ray will reprise their roles in the sequel, with Jeramy Blackford joining the fold as a journalist investigating the murders.
Two years after a group of bodies were discovered on an abandoned farm, a journalist visits the scene of the crime in hopes of learning more about the unknown killer. As he begins to discover details that may have been overlooked, he finds himself closer to the truth than he ever imagined or wanted to be.
Stauffer and the rest of the creative team behind Pieces of Talent are eager to reunite for A Missing Piece, but they cannot do it without your help. They're aiming to shoot in late spring 2015.
Visit http://piecesoftalent.com/amissingpiece/ to learn more.