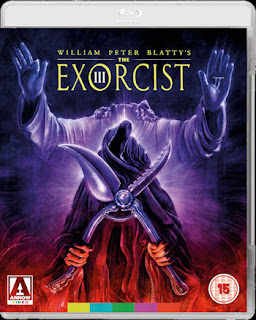 The true heir to William Peter Blatty and William Friedkin’s 1973 masterpiece, The Exorcist III is a hellish horror detective story that pairs thoughtful theological themes with scenes of sheer terror.

The personal vision of Blatty (the acclaimed author of The Exorcist), The Exorcist III is set 15 years after the events of the first film and sees Lieutenant Kinderman (George C. Scott, The Changeling) investigate a series of horrific murders that follow the modus operandi of the notorious Gemini Killer... who died several years earlier in the electric chair.

After his friend Father Dyer (Ed Flanders) is murdered in his hospital bed, Kinderman’s investigations lead him to ‘Patient X’, a psychopath housed at the same hospital who claims to be the Gemini Killer, and who knows intimate crime scene details. Their encounter leads to a fiery climactic confrontation between the eternal forces of good and evil...

The Exorcist III boasts some of modern horror’s most unforgettable scares and exceptional supporting performances from Jason Miller (The Ninth Configuration) and Brad Dourif (Dune). Blatty’s film is presented here in both its original theatrical cut and the recently assembled ‘Legion’ director’s cut.

DISC ONE: THE THEATRICAL CUT