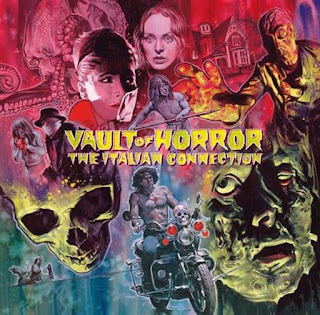 The golden era of Italian horror dates from the early 60’s to the mid 80’s. During that time directors such as Mario Bava, Dario Argento, Lucio Fulci, Antonio Margheriti, Umberto Lenzi, Joe D’Amato, and Enzo. G. Castellari directed some of the most outrageous terror films ever. As well as depicting some of the most stylish and horrific on screen images their films included some of the most elegant and beautiful scores. The cult following for their movies is as popular now as it’s ever been.

VAULT OF HORROR – THE ITALIAN CONNECTION presents twenty of the most amazing film themes ever and is a heady mix of funk, disco, electronic and prog rock. It features composers such as Stelvio Cipriani, Franco Micalizzi, Roberto Donati, Carlo Rustichelli, Nico Fidenco, Ennio Morricone, Fabio Frizzi, Riz Ortolani and many more. There are also original soundtrack themes from such films as  ‘Zombie Flesh Eaters’, ‘Cannibal Ferox’, ‘Blood And Black Lace’, ‘The Beyond’, ‘The New York Ripper’, ‘Tentacles’ and ‘City Of The Living Dead’

The truly stunning, exclusive sleeve has been painted by renowned graphic designer & commercial artist Graham Humphreys and the biographical notes on each track are written by author, critic and FrightFest director Alan Jones.  As an added bonus Demon Records are including a CD version in a replica card wallet as well as a stunning 12x12” reproduction collector’s art print of the sleeve painting.

Pre-order the soundtrack from Amazon.co.uk