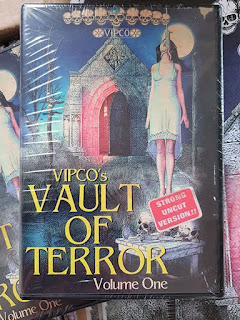 VIPCO are proud to announce the release of their first anthology film VIPCO’s VAULT OF TERROR : VOL 1 available now on DVD.

THE NURTURING Directed by Alex DiVincenzo

All these films are wrapped around by THE ONE Directed by Peter Goddard.

A man regales his not so willing House guest with tales of the macabre! From something creeping under a students bed, a vengeful gardening appliance, a rock band on the flight from hell, to a woman seeking love through revenge and a man taking holy retribution into his hands.

This is a Limited edition, first run of 50 units for VIPCO’s VAULT OF TERROR : VOL 1, which also ships with a free A3 poster. The DVD features a trailer reel for other VIPCO releases.

Order a copy of VIPCO’s VAULT OF TERROR : VOL 1 from VIPCO at the website:

VIPCO’s new company directors, Terence Elliott, Peter Goddard and David Rogers are no strangers to the realms of the macabre and will continue to ramp up the shock-factor to bring new gore-filled entertainment to horror fans around the globe.

Follow VIPCO on the social media channels listed below to stay up to date on all the new releases: