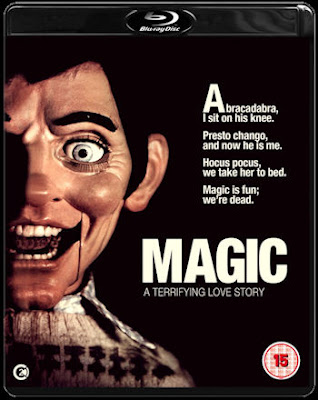 SECOND SIGHT sprinkles its Magic on Anthony Hopkins’ 1978 horror classic with its first UK Blu-ray release set to arrive this March with a host of brilliant special features.

With the continuing popularity of creepy dolls on screen from Hugo to Annabel via the many incarnations of Chucky, we meet one of the original devilish dummies: Fats…the side-kick from hell.

Adapted for the big screen by William Goldman from his best-selling book, Magic is directed by Richard Attenborough and arrives on Bluray on 23 March 2020.

Corky (Hopkins – The Silence of the Lambs, The Two Popes) is a shy magician who just can’t get a break, but when he introduces foul-mouthed ventriloquist doll, Fats, to his act, his star begins to rise. With the chance of hitting the big time finally on the cards, the pressure starts to get to him.

In a panic Corky flees the big city, returning to the security of his hometown. When he reunites with old high school flame Peggy (Ann-Margret – Tommy, Grumpy Old Men), love could be in the air. But Fats doesn’t approve and he’s about to create carnage. Who’s really pulling the strings?

It’s time for some Magic…but beware, the demonic dummy will have you screaming for mummy.

Pre-order the UK BD from Amazon.co.uk
Posted by Dark Angel at 17:22