Day 3 of Mayhem was another mixed bag, with a number of foreign language films, a bizarre art film and a classic Italian shocker.

First up was the extremely bizarre Japanese gore fest TAG by Sion Sono (Dir - Suicide Club). Watching 120 school kids getting cut in half in the first 2mins of a film in a bizarre coach crash, is a good way to start. But from there on in, things get really wierd for the one lone surviving schoolgirl.

Very bizarre and surreal, not to mention extremely violent, I think I understood the ending (which I won't spoil) but  it really was a job to know what to make of it, other than I enjoyed it.

Check out the trailer and see for yourself on YouTube

Moving from Japan to South Korea for our second film of the day, Sun-ho Cho's A DAY. In which a highly decorated doctor stops to help at a road traffic accident, only to discover his daughter is one of the victims.

Waking up to find it was a dream (or so he thinks) he is then alarmed to find himself living the same day, over and over again as he attempts in vain to try and prevent the accident from happening. But help comes from an unexpected source when he discovers he may not be the only one living the same events repeatedly.

Kind of like Groundhog Day meets Final Destination, this was one of the most tense films I've seen in a very long time and was really taken aback by it. If you get chance, see it!!!!
View the trailer on YouTube

Changing pace with our third film was Ana Asensio's MOST BEAUTIFUL ISLAND. Set in New York, Luciana (played by the director herself) is an illegal immigrant, struggling to get by, doing cash-in-hand work from ads on Craigs list.

So when she's asked to entertain some guests with some other girls at a special "party" for which she'll be paid $2000 it seems too good to be true. Needless to say, upon arrival, things take a very sinister turn as she wonders what she has let herself in for. But as it turns out, its not what she (or we for that matter) think...

Whilst the film is  competantly shot, acted and edited, for me it was just way too slow. The end premise was "interesting" (which I won't spoil for you) but I just felt it took too long to get there and explain everything. But then, I do kind-of have a short attention span and prefer faster paced films and the other audience members seemed to like it .

After a quick break, there was the Short Films Showcase, which this year featured 12 widely different horror themed short films from around the world. However, in the interestes of Brevity I shall be reviewing those seperately in their own review section.

Then it was back to the feature films with the UK premiere of PREY from Dick Maas (Amsterdamned).

A series of deaths around Amsterdam from what appears to be a wild animal leads police to believe there's a Lion on the loose. Enlisting the help of a zoologist (Sophie Van Winden) and a wild game hunter (British actor Mark Frost) they set out to trap the lion, with hilarious results.

The passengers of a tram are swiftly devoured, a delivery boy on a moped is chased around the back streets and an entire family on a farm are devoured whilst the incompetant police end up shooting at each other in a series of botched operations to catch the beast.

Sporting a wicked streak of dark humour, in which absolutely NO ONE is safe, children the elderly, the disabled. This was a brialliantly fun film, which the audience thoroughly enjoyed.

Director Dick Maas was there to talk about the film and take audience questions, footage of which will appear on my YouTube channel shortly. 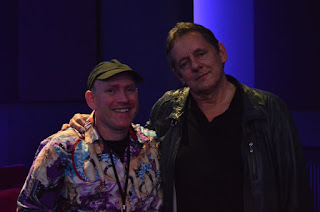 Day 3 closed with a screening of the newly restored version of Dario Argento's classic shocker Suspiria. A film that all good horror fans should be more than familiar with, and if not, you should hang your head in shame.

Jessica Harper stars as the new student at an exclusive ballet school in Germany, who discovers not everything is as it seems there.

When one of the girls is murdered, it marks the start of a series of bizarre dissapearances at the school, which she discovers, in an extremely bizarre plot twist, may have something to do with the school being founded by a coven of witches 100s of years ago.

Visually stunning, featuring a whole slew of brutally graphic murders and an appearance by a rather young looking Udo Kier (Mark of the Devil, Iron Sky, Blade), albeit dubbed with an American accent. This new restoration is undoubtedly the best it has ever looked and was a real treat seeing this on the big screen. Not sure when this version will be released to Blu-Ray in the UK, but it can't come soon enough!

View the trailer on YouTube
And thus concluded Day 3.