It's that time of year again, when horror fans from all over the East Midlands, and further besides, make their annual pilgrimage to the Broadway arts cinema in Nottingham to bear witness to the spectacle that is the "Mayhem Horror Film Festival" for another four days of Horror, Sci-Fi, Cult and Exploitation films and more!

This year kicked off with the hilariously funny, not to mention brutally bloody, feature film debut from director Benjamin Barfoot , "DOUBLE DATE". 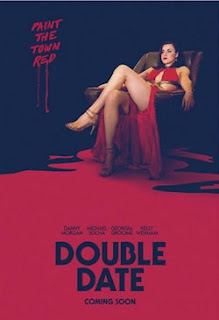 In this ultimate 'Battle of the Sexes", Jim (played the writer, Danny Morgan) is a hapless 29 year old, who is useless with women and still hasn't lost his virginity yet. So when a couple of rather nice looking girls take an interest in him and his friend Alex (Michael Socha - TVs "Being Human"), he can't believe his luck.

However, as the old adage goes, "if something appears too good to be true, then it probably is". Seems these girls have been preying on men for some time and if they get their way, it won't be Jim's virginity that he loses.

But first they have to get them home, which proves extremely difficult, as things invariably go awry, in a series of farcical escapades involving Jim's devout christian parents, Alex's drunken trailer-trash father (played rather aptly by Dexter Fletcher) and a series of spiked drinks, which culminates in an extremely bloody, not to mention, politically incorrect end fight, as the two lads dicover what the girls want with them and a slapstick battle ensues!

Also starring Kelly Wenham and Georgina Groome (in a much differant role to her character from "Angus, Thongs and Perfect Snogging"), the film went down a storm with the crowd, who laughed throughout.

Director Benjamin Barfoot, Producer Matthew James Wilkinson, writer and lead actor Danny Morgan and co-star Georgina Groome were in attendance to chat to the audience afterwards and field questions, footage of which will appear on my YouTube channel shortly. 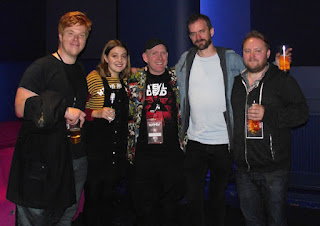 The film is actually released to UK cinemas THIS weekend, from Friday the 13th of October. If you get the chance, go see it.

The  second and final film of the evening, "M.F.A.", kept with the theme of women vs men, but substantially different in tone and style, as it asks the question, if the law won't do anything, is vigilante justice ever justified? 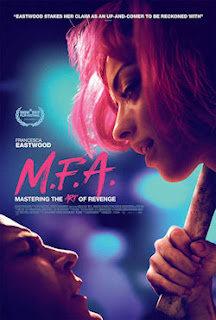 Art student Noelle (Francesca Eastwood - TV's "Heroes Reborn") is not best pleased with the response from her college after being sexually assaulted during a party at one of the fraternity houses. When they do little or nothing about the allegations.

Discovering she is not the first person to have suffered such an ordeal on campus, and the college seems more interested in covering things up than dealing with them. She subsequently sets about tracking down those who've got away with their crimes, and making them pay the old fashioned way.

But although the first killings appear to be accidents, the more people she kills, the more confident she becomes in getting away with it, and the more brutal the murders become. Soonafter, she finds the police are on her case and no one is going to look the other way this time.

Directed by Natalia Leite and written by Leah McKendrick, who also co-stars as Noelle's room mate Skye. The film was rather like a female "Death Wish", but set on a college campus and was again, certainly well received by the audience. If you've seen "I Spit on Your Grave" or "Angel of Vengeace" (Ms. 45) this film makes an excellent companion piece to those.

And that was it for Day 1