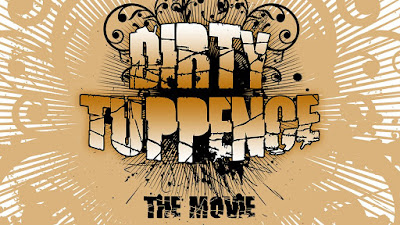 Just when you thought the world had seen enough deluded people, along came a rock band that outstripped them all – Dirty Tuppence.

Legendary drummer "Egg" (AKA Percy Gash-Hound) is having to start his life afresh due to a very indelicate accident and it's highly publicised aftermath ... which saw him kicked out of the multi-million selling rock band Bad Penny, and also confined to a wheelchair.

After a year of extravagance and excess Egg has now spent all of his £3M fortune and needs a new income. So he teams up with his voluptuous new carer Brody (who also happens to be a mean bassist), and his vertically challenged twin brother Maynard (on guitar) ... and together they begin auditioning for a charismatic lead singer for their new band Dirty Tuppence (a Bad Penny tribute act - or is it vice versa?).  Although how Egg plans to drum when he can't move his legs is something he is yet to work out !

"Dirty Tuppence - The Movie" is a topsy-turvy roller-coaster of a movie injected with a quirkiness and peculiarity that only a writer/director/actor like Warren Speed (who cites his two main influences as Charlie Chaplin and Rob Zombie) could imagine - and then bring to life.

For more info on how to get involved visit the films Kickstarter Page.