Day 2 of Mayhem kicked off at 3pm on Friday, in what has become known as the "wierd" slot, where they show the films that are kind of difficult to categorise and this film was certainly no exception to that

BITCH by writer and director Mariana Palka revolves around a downtrodden housewife (played by the director herself) and her husband Bill (Jason Ritter - Freddy Vs Jason), who basically lives for his executive job, paying her and his family little or no attention.

Having finally reached the end of her tether, she suffers a break down, closets herself in the basement and proceeds to act like a dog. Walking on all fours, barking and howling at people and deffacating everywhere. Forcing the extremely inept father to try and cope with bringing up their 4 kids on his own and trying to work out how to deal with her.

A jet black comedy, which I assume was trying to make the point that neglecting your family and burying your head in the sand whenever there's a problem will eventually bite you on your arse.  The film seemed to be well received by the audience, but again was a bloody wierd one to describe.

You can see an interview with the director chatting about her film on YouTube.

The next film of the day goes on to prove that the female of the species is certainly more deadly than the male in 68 Kill from director Trent Haaga (Dir - Chop , Actor - Tales of Halloween).

Chip (Matthew Gray Gubler - TVs Criminal Minds) is a gullible young man, who's coerced by his psychotic girlfriend Liza (AnnaLynne McCord in one of her typical psycho roles) into ripping off her 'sugar daddy'. Only to realise just how psychotic she really is, when the robbery goes wrong and she kills the guy and his wife.

When they are then forced to abduct a girl that witnessed the killings, he realises they've gone too far and he takes off without her. But it seems his 'captive' may be just as bad as his ex. And to top it off, when they are ripped off by another women they encountered on their travels, it seems he's in a whole lot of trouble, particularly as Liza wants her money back.

Hilariously violent and downright wrong in places, this one was a laugh riot, filled black humour and was loved by the audience.

Director Simeon Halligan's HABIT was a substantial change of pace and one that will certainly make people think twice about ever visiting a massage parlour.

Set in Manchester, deadbeat Michael (Elliot james Langridge - Northern Soul) strikes up a friendship with a young girl, Lee (Jessica Barden TV's Coronation Street, and Hanna) who manages to get him some cash-in-hand work as a doorman at her uncles 'Massage Parlour' *COUGH* "Brothel" *COUGH*.

But it isn't long before he realises there's something very, VERY sinister about this particular Gentleman's establishment and not just with the clientele that visit. I don't want to give too much away about the plot, but think Best Little Whorehouse in Texas (without the singing) crossed with Texas Chainsaw Massacre (but set in Manchester).

Based on the book of the same name by Stephen McGeagh, this is an exceptional gritty tale set around Manchester's criminal underbelly which boasted quite a few familiar faces from British Soap Operas, including Roxanne Pallet (TVs Emmerdale and Lake Placid 3, Wrong Turn 6) , Joanna Mitchell (TV's Emmerdale,  and Before the Dawn, Bait) and Loius Emmerick (TVs Brookside, and Layer Cake) and seemed to go down well with the audience.

Director Simeon Halligan and Producer Rachel Richardson-Jones were in attendance to chat about the film afterwards, along with lead actor Elliot james Langridge who introduced the film, before having to dart off to another engagement. Footage of which will appear on my YouTube channel shortly 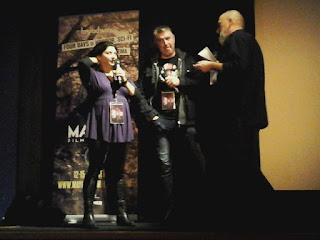 With it being Friday the 13th, the evening closed rather aptly with a screening of Friday the 13th Part 3 in 3D, which we watched wearing the old fashioned red and blue specs.

I'm sure all good horror fans know the story, but for those who don't. Picking up after the events of part 2, Jason is still prowling around Crystal Lake and comes accross a group of teens holidaying at a cabin a bit further round the shoreline, which he proceeds to hack to bits with various sharp implements after acquiring his now famous Hockey Mask.

Filmed to cash in on the short lived boom of 3D films of the early 1980s, complete with objects being deliberately shoved directly into the camera lens (the 3D effect did kind of work, though some scenes were better than others), it's certainly lost none of its charm over the years, which had the audience laughing hysterically at its outright cheesiness.

It would appear this screening was taken from the US DVD, as the intro titles were in 2D, as per the current US release. Despite the titles being in 3D on the original print, which was a shame. But aside from that, it was great seeing some classic 80s 3D cheese on the big screen with a festival crowd.

View the trailer on YouTube.
And that was it for Day 2.