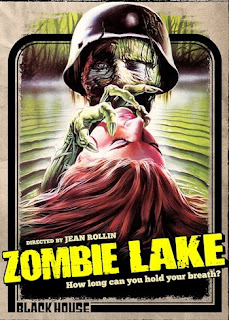 Nazi Zombies return from their watery grave and go on the rampage in a remote village in rural France in Jean Rollin’s “Zombie Lake”, which is out now on UK DVD from Black House Entertainment this month.

There are some zombie films that are just s-o-o-o-o-o hilariously bad they have to be seen to be believed, and Zombie Lake is one such example. Many years ago, during WW2 a group of German soldiers, retreating from the advancing Allies, were ambushed by French resistance fighters and their bodies dumped into the lake.

Now, they have returned, covered in green face-paint, and set about attacking anyone who ventures near their final resting place. It starts with a young girl doing a bit of nude sunbathing by the lakeside, followed by bus load of volleyball players who decide to go skinny dipping in the lake, before going on to prey on any local villagers who venture too near to the water.

Why it’s taken the undead soldiers until the early 1980s to seek revenge on the townsfolk is never explained, not that it’s really important as the film is so hilariously bad, you’ll best a gut laughing whilst watching it.

Zombie make-up that basically consists of green paint, which doesn't even cover the whole of the actors faces and keeps washing off in the lake. Underwater shots filmed in a swimming pool, not to mention the plot inconsistencies bigger than the aforementioned lake itself and a hilarious scene where the villagers organise themselves into a vigilante mob to take on the zombies, which all goes disastrously wrong. 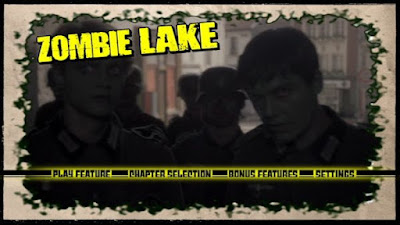 Extras on the disc consist of a selection of alternate takes, in which the female victims get to keep their clothes on. The original theatrical trailer and trailers for the films “Crimson” and “Oasis of the Zombies”.

I compared this to the old US DVD from Image Entertainment and can honestly say that the Black House transfer is certainly a lot brighter and clearer than the one on the Image disc. You also have the option of watching the film in either English or French, though the default track is the French one for some rather annoying reason, meaning you have to select English from the set up menu prior to viewing if you wish to watch this in English.

Zombie Lake is by no means the best of the small cycle of Nazi Zombie films that came out in the late-70s/early 80s (indeed its one of the worst), but that doesn’t mean it isn’t wildly enjoyable, albeit for all the wrong reasons. So if trashy Eurohorrors are your thing, grab the popcorn and a six-pack and have a blast. And if you like this, you’ll be pleased to know that Black House Entertainment are releasing the similarly themed “Oasis of the Zombies” shortly too.

Zombie Lake is out now on UK DVD from Black House Entertainment.