Out now at selected UK cinemas, Nicholas Pesce’s dark and disturbing chiller "Eyes of my Mother". 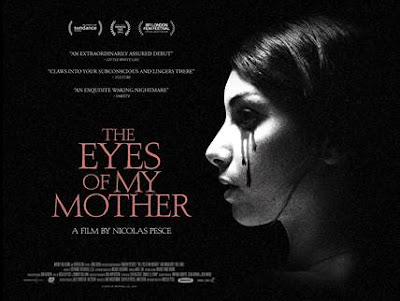 As a young girl, Francisca (Kika Magalhaes) witnessed her mother being murdered in their remote farmhouse by a passing psychopath. However, he picked on the wrong home, as he is subsequently dealt a suitably gory revenge by the father upon his return.

Chained up in the barn, tortured and kept as a pet for Francisca, who likes experimenting on him using the surgery techniques she learned from her mother, to say this had a traumatic effect on her upbringing is something of an understatement.

Now an adult, following the death of her father and her “pet” Charlie, she seeks a replacement, though this isn’t easy and several dead bodies are left in her wake. But if you thought the film was disturbing enough up to this point, wait till you see what happens when she finally does manage to lure someone back to her home with the intention of taking Charlie’s place…

Filmed in black and white and in Portuguese language, with English subs. This was like watching a European art-house version of Texas Chainsaw Massacre, being a VERY disturbing tale about Isolation, loneliness and obsession without compassion and is certainly one of the most disturbing films you are likely to see this year.

"The Eyes of My Mother" is out at selected UK cinemas today.