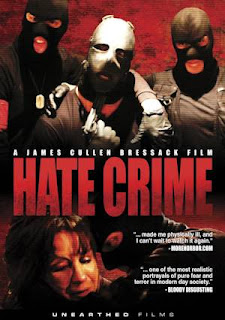 James Cullen Bresseck recently shared a screener copy with me of his film “Hate Crime”, which is currently available on Video on Demand and will be released on US DVD shortly.
The film is basically, an extremely harrowing tale of an incident that befalls a Jewish family who are preparing to celebrate their youngest son’s birthday one evening. As they’re just about to settle down around the table, they’re subject to a home invasion by a group of drug fuelled neo-nazi thugs in ski-masks.
After tying them up, the intruders then subject them to a brutal ordeal of humiliation and torture, as one of the children is executed gangland style, the wife is brutally raped and the 2 other children beaten and humiliated in front of the father who’s forced to watch.
Shown entirely through the point of view of the family’s camcorder, which the thugs use to film the events for their own amusement, this is another one of those “found footage” style films. Which despite the low budget and virtual no-name cast, is still an extremely uncomfortable ordeal to sit through.
If you remember the scene in “Henry : Portrait of a Serial Killer” where Henry and Otis are videoing themselves beating a family to death, this is basically a feature length version of that. So if you found that difficult to sit through, imagine that one scene making up virtually an entire films running time.
Clocking in at just over an hour, its not an exceptionally long feature film and with it being a low budget production, not all the acting is up to the standards of the Royal Shakespeare Company (so to speak). Also, some of the more brutal scenes are perhaps more implied than shown (the wife and daughter get to keep their underwear on for the most part whilst being sexually assaulted). But then, many might argue that’s a good thing and in any case, does not detract from the extremely uncomfortable nature of it all.

The film is available to stream at http://www.psykikjunkypictures.com/

You can also pre-order the forthcoming US DVD from Amazon.com