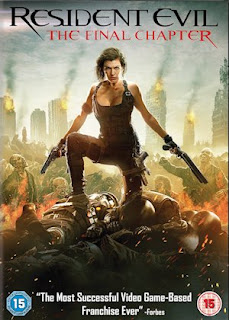 Milla Jovovich returns as Alice for one last battle in this sixth and final outing in the Resident Evil franchise, which comes to UK Disc June 12 from Sony.

Picking up after the events of “Retribition”, Alice is forced to return to the ruins of Racoon City, where evil corporate scientist Albert Wesker has set up shop in the old Umbrella Hive.

However, she also discovers what few human survivors remain in the desolate city are facing a new threat, from hundreds of undead who are being lured there by Umbrella corp soldiers.

So the scene is set for a series of massive zombie battles as Alice tries to help the survivors defend against the new zombie threat whilst figuring out how to break into the hive and take out Wesker once and for all.

A satisfying conclusion to the Resident Evil films, if you loved the other movies you'll defintely want to pick this one up.

I was sent the DVD to review, which contains the following special features, which all feature interviews with the director, cast and crew...

Resident Evil : The Final Chapter is out on UK disc June 12 from Sony Pictures Home Entertainment.