The fun started with a Midday screening of Gabriele Mainetti’s offbeat Italian superhero(?) film “The Call Me Jeeg Robot”.

A petty criminal dives into a river to evade the police. However, he lands on some barrels underneath the water, which crack open, covering him with oily muck.

Subsequently finding that he’s now got superhuman strength, he initially uses his powers to rip off cash machines and armoured cars. But when a group of gangsters threaten the mentally ill girl next door, who’s mobster father recently “disappeared”, he suddenly finds himself turning good guy.

Something of an exceptionally violent black comedy, this Italian language movie isn’t quite “The Toxic Avenger”, but was certainly bloody good fun.

This was followed by a screening of Carles Torrens “Pet”. In which a depressed loner, who works a dead end job at an animal shelter, becomes infatuated with a girl he randomly bumps into on the bus.

After she shuns his attempts to woo her, he decides to teach her a lesson using some techniques he learned dealing with unruly dogs at the pound. But it seems this girl is harbouring a very dark secret and may not be quite so easy for him to bring to heel…

Perhaps best described as “A Gentleman’s guide to dating young ladies” [/sarcasm] this was a rather grisly film, with a couple of unexpected twists. Though I felt that it perhaps started running out of steam towards the end, it's definitely worth checking out. Dominic Monaghan is aptly cast as the creepy loner, as is Ksenia Solo as the would-be victim.

Next up was Gareth Tunley’s "The Ghoul". A British psychological thriller starring comedian Tom Meeten and comedy actress Alice Lowe in distinctly un-comedy like roles.

Meeten (appears to) play an undercover cop named Chris, who is trying to pass himself off as a clinical depressive, so he can investigate one of the patients of a certain Dr Fisher. Who he thinks is implicated in a couple of murders.

But all is not as it seems with Chris, and what’s real and what he’s pretending to be becomes something of a blur. So much so, it had most of the audience wondering what on Earth was supposed to be going on.

I appreciate this is director Gareth Tunley’s directorial debut (who’s probably better known for his acting roles) and did a sterling job in getting this entire feature shot in just 10 days. But it seems the film was trying to be “too clever” and just confused everyone and personally, I just found it to be a bit of a bore (which seemed to be the general consensus - sorry guys).

Director Gareth Tunley, producer Jack Guttmann and lead actor Tom Meeton were in attendance to talk about the film and do a Q&A session afterwards, footage of which will appear on my YouTube channel shortly. 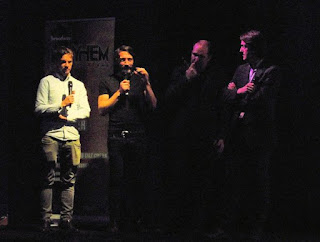 
After The Ghoul came the “Scary Shorts” section. A collection of 11 short films from various directors, which for brevity’s sake, I will be reviewing separately in a future post.

There then came my favourite film of the evening, "The Devil’s Candy". In which a couple and their young daughter, who are all Heavy Metal fans, move into a house with something of a chequered past. Only to find one of the previous occupants, who has a history of Mental Health problems, would like it back.

Unlike other horror films in which ‘Metal Heads’ are the primary focus (like Deathgasm), this one is NOT a comedy. Indeed, it was kind of like Amityville Horror (or indeed Amityville 2 : The Possession), as you suspect there may be evil forces at work driving this person’s behaviour.

Couple of VERY tense scenes, and a kicking Heavy Metal soundtrack made this a winner with me (though Metallica’s Jump in the Fire would perhaps have been a better end credits song, which you’ll understand when you see this).

View the trailer on YouTube (only trailer I can find is dubbed in Russian for some reason).

The evening concluded with a short film entitled Gwilliam (which I will review when I do the Scary Shorts section) followed by a screening of Herschell Gordon Lewis’s classic “Blood Feast”.

A psychotic Egyptian caterer goes around LA murdering people and harvesting their body parts for a very special feast he is preparing for an unsuspecting customer.

Hailed as the worlds first splatter movie, this 1963 film looks pretty tame and cheesy by today’s standards, but is still good fun.

This version of the film contained a special introduction by the director, which had been recorded shortly before his death earlier this year and was a nice addition to the line-up given his recent passing.

And that was the end of Day 3.

The Mayhem festival runs every October, at the Broadway Cinema - Nottingham.