"The Editor" - a review from the Mayhem Film Festival 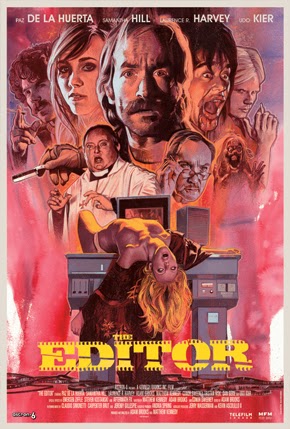 On Thursday the 30th of October I attended the opening night of the Mayhem Horror Film festival at the Broadway Cinema in Nottingham to see, amongst other films, “The Editor” by infamous production crew ‘Astron-6’
The show had opened with a selection of their earlier short films which included, amongst other shorts, “Bio-Cop”, a bizarre cross between “The Incredible Melting Man” and “Manic Cop”. “Inferno of the Dead”, in which the zombies from “Nights of Terror” (Burial Ground) turn out to be pretty lousy flatmates, “Cool Guys”, a piss-take of those 80s beach movies and “Goreblade”, a Hercules/Xena type spoof.
Having been given a taste of what was to come, it was onto the main feature. “The Editor”.  Which was basically a send up of those Italian Giallos (crime thrillers) from the 70’s and early 80s.
The film revolves around a Franco Nero lookalike, Rey Ciso (Adam Brooks), who was once an award winning film editor. But has since been forced to take menial work on low budget films, after an unfortunate accident in the editing room left him with a prosthetic wooden hand, which has severely hampered his editing abilities.
Unfortunately, it seems people in the cast and crew of the latest film he’s working on are getting bumped off by a knife wielding maniac and the bungling policeman in charge, detective Porfiry (Matthew Kennedy) thinks it’s him.
However, it seems Porfiry is a complete idiot who’s too incompetent to catch a cold and only got promoted to detective because his wife, who also happens to be one of the actresses in the film, happens to be the daughter of the police chief.
Meanwhile, the killer continues to hack and slash his way through the film crew, as Porfiry tries desperately to pin it on Ciso, whilst the other cast members only seem to care if this sudden loss of lead actors means their roles will be expanded.
Done in the style of those old Italian horror films, particularly those of Dario Argento, the film is part parody and part homage, featuring intentionally bad dubbing, ludicrous plot twists and tons of references to other movies, such as “The Beyond”, “New York Ripper” and even “Hitch Hike”. Which also features tracks by noted genre composer Claudio Simonetti and a guest appearance by Eurohorror regular Udo Kier, who has a small role as a doctor.
If you’re a fan of Italian cinema, you’ll undoubtedly love this, which plays like a Troma version of Tenebrae and went down an absolute storm at the festival. However, younger horror fans who’s knowledge of horror extends solely to the Paranormal Activity films and the likes of Saw, probably won’t get the humour.
This one is currently doing the rounds on the festival circuit, so if you get chance to see this with an audience, go check it out. Their earlier short films are also currently available on DVD in the US, which I would also advise checking out, for you to get a feel of what you’re in for!

You can see the Q&A session with the film makers that followed the screening on YouTube.

For more about "The Editor" and other films by Astron-6, visit http://www.astron-6.com/