Screened as part of Saturday’s line up at the mayhem Festival in Nottingham, was the annual “Scary Shorts” section.

There were 11 films in the section, plus an additional one shown later on in the evening, just before the final film of the day, which Ive also reviewed here.

First up was the zombie short “A Father’s Day” by Mat Johns, in which a couple of zombies, who were father and daughter in the previous life, randomly bump into each other in the aftermath of the apocalypse and the two reconnect.

A rather odd tale which asks the question “What if zombies had feelings too”?

Running at 9m50, this had some really impressive zombie make up and special effects, as well as a slight touch of black humour, which made this one stand out.

Next was Liam Banks “Sandman”, a good old fashioned tale about a young girl, who wakes late at night to find something nasty and otherworldly is outside her house and trying to get in.

An effective chiller with a good soundtrack that ramps up the tension and some good jump scenes (the “bogeyman” creature was pretty freaky too).

Tristan Oldfield’s “White Lily” was a bit of a change of pace, being a sci-fi movie rather than a horror. In this, a spaceship captain has a bit of a bump whilst navigating an asteroid field, which causes severe problems for his assistant, in this tale of love, memory and comets.

Was extremely impressed with the special effects in this. Not sure what the budget was (over £4000 was apparently raised from a Kickstarter fund), but it certainly looked like it had a lot more money than it probably did.

You can find out more about the film on the Facebook page.

Dawn of the Deaf 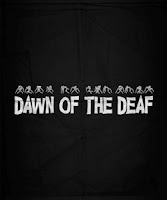 Rob Savage’s "Dawn of the Deaf" starts with several deaf people in different scenarios, when everyone around them suddenly drops down dead, having been affected by a high pitched sound. The only problem is, those killed by this sound don’t stay dead and proceed to get up and start attacking the deaf people who were, obviously, immune to it.

Now, this was a film I had a serious problem with, it was not that it was a badly made or anything, and it had a very interesting premise, which also showed some of the problems deaf people face in real life. The problem I had was with the tone of the film.

With a title like Dawn of the Deaf you’d be forgiven for thinking this was some sort of comedy. But, whilst there was a bit of ironic humour, one of the scenarios involved a very disturbing scene of a deaf girl being abused by her father, which was totally at odds with the jokey title of the film, and this just did not sit well with me.

Either they needed to change to title to something less comical, or take out the abuse scene (or at least make it a bit less icky, if such a thing is possible) and the film would have worked much better in my view.

Strangers in the Night

Arguably my favourite film of the Scary Shorts section was this bizarre comedy, Strangers in the Night, by Conor McMahon (Dir - Stitches).

Set in rural Ireland, Damien has to try and prevent a banshee from taking his grandmother’s soul. But the only way to stop that from happening is to give the banshee a kiss, which will break the spell.

But not being much of a ladies man and only having till dawn to do it, a series of haphazard romantic encounters occur as this socially awkward loner tries to woo the banshee and stop it from taking his grandmothers soul.

This was a really funny film, and went down a storm with the audience.

One of the more bizarre entries, Simon Cartwright’s Manoman, is a rod puppet animation about a timid man, who enroles in some class giving fierceness lessons (something to do with primal screaming?) to help him man up.

But instead, his pent up rage gives birth to a smaller, hairer and more violent version of himself, which proceeds to run riot.

You can also watch it on Vimeo

Set in England during the early 80s, Prano Baily-Bond’s "Nasty" takes place against the backdrop of the Video Naties furore.

A large number of people have disappeared, mostly adult men, but a few children too and the only connection appears to be they all had illicit stashes of banned horror films they regularly enjoyed viewing. But when 12 year old Doug starts watching some of his fathers horror movies, he makes a shocking discovery.

Somewhat reminiscent of the likes of Videodrome, this was a bit of a strange one. But was well received by the audience (see if you can spot all the Evil Dead references in it).

L Gustavo Cooper’s “The Home” takes place at a catholic run home for unwed mothers in 19th century Ireland. The nuns constantly tell the young girls not to leave their dorms at night, unless they want to fall prey to some nasty demon that stalks the corridors.

Although the kindly Father Michael assures them the nuns are just trying to scare them to stop them wandering off in the night, it seems the Nuns might actually be telling the truth.

A well made, spooky period piece, though clocking in at 7mins doesn’t leave much time to expand the plot. Would like to see this turned into a full length feature.

Jill Gevargizian’s The Stylist is kind of a modern day spin on the legend of Sweeney Todd, revolving around a psychotic hairdresser, who likes scalping her victims and displaying their hair pieces on dummy heads in her basement.

A nicely shot thriller with some nice gore, which was rather reminiscent of the 1980s classic Maniac. About another psycho who had a thing for women's scalps.

Without doubt, THE most bizarre short film of the lot (and that’s saying something) was Calvin Lee Reeders “The Procedure”.

A young man is getting into his car, when he is struck by a blowdart and rendered unconscious. He awakes sometime later to find himself strapped to a table with his eyes clamped open with a sign that buzzes “Quiet Please” everytime he screams, whilst a large white bag, with someones naked backside sticking out of it, is slowly lowered down towards his face…

I have absolutely no idea what the point of the film was about, but the audience were in hysterics and clearly loved it, so I guess whatever the director was trying to do he did it right.

This one has a psychotic tooth fairy, which in French folklore resembles a mouse, going on the rampage against a father and his young daughter one night, after loosing one of the teeth in its collection, which it is determined to replace.

Not one to watch if you have a fear of rodents, or dentistry for that matter.

Watch a preview on Vimeo 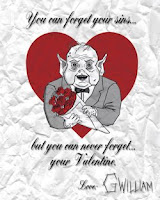 Brian Lonano’s Gwilliam was screened not with the other shorts, but later on in the evening, just prior to the final film of the day. This particular tale, focuses on a former jail inmate who is told to visit the back alley of a certain bar if he fancies a “good time” to celebrate once he gets out.

But instead of an attractive lady, he finds a grotesque goblin named Gwilliam living in one of the bins out back. However, it seems looks aren’t everything and whilst you can forget your sins you can never forget Gwilliam.

Probably the second most bizarre short of the day (after The Procedure), which ranked quite highly on the “wrong” scale and had the audience in hysterics (brings a new meaning to the name "Goblin" anyway).

Checkout my reviews of the Mayhem Festival Day 1, Day 2 & Day 3.